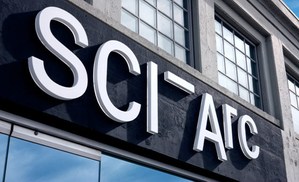 SCI-Arc, located in the Arts District of Downtown Los Angeles, is one of the nation's only independent schools of architecture. With 500 students (250 of them undergraduates), it is a hub of public discourse, new technology, and speculation about the future of our great city and beyond. The SCI-Arc Undergraduate Degree (B.Arch.) is an accredited 5-year professional degree allowing graduates to become licensed professionals. While the curriculum is focused on creativity and design excellence, we are also committed to a broad liberal arts education.
The role of the architect in the 21st century has changed from one of technician and administrator to leader of large groups of professionals, stakeholders, and creative teams. Now more than ever, architects need to be able to think critically, argue their positions, and express their visions in a wide variety of contexts. Our liberal arts education-- which includes art history and theory, film history and theory, philosophy, new forms of science and models of nature, contemporary civilization and geopolitics, and rhetoric/ debate-- prepares students for this new, broader role in society. The mission of the SCI-Arc undergraduate education, through this combination of design excellence and the liberal arts, is to create students who will be the intellectual leaders of their generation.
Graduates of the SCI-Arc Undergraduate Program are highly sought-after, both by architectural offices around the world, as well as by the world's best graduate programs. The Program is ranked #2 in Undergraduate Programs Most Admired by Deans and Chairs in the 2017 DesignIntelligence survey.
SCI-Arc is proud to announce a full-tuition scholarship for current Los Angeles Unified School District (LAUSD) students. This scholarship is intended for first-year freshman, and is merit-based. It will be awarded for the 2017-2018 year, and can be extended to cover all 5 years of tuition, provided the student remains in the top 10% of their class. Applications are currently being accepted online, and are due by January 15, 2017. Portfolios of work may be submitted but are not required. Students with a strong academic record are urged to apply.
Apply Online:
https://sciarc.edu/admissions/apply/bachelor-of-architecture/