Patrick Sherwood teaches various math classes in the Math Department at HArts Academy of Los Angeles. Mr. Sherwood hails originally from points north. He received a Bachelor’s of Science in Mathematics from Cal Poly, San Luis Obispo and a Masters in Curriculum and Instruction—along with a Teaching Credential—from California State Dominguez Hills.

Mr. Sherwood comes to the teaching profession from other industries, most recently as a chef in Orange County. He is a transplant, having lived previously in Austin, Texas and Brooklyn, New York. A published author, Sherwood’s interests range from mathematical minutiae to post-modern literature.

In 2015, Patrick Sherwood was honored with a Rookie Teacher of the Year Award at Dodger Stadium in an event attended by Los Angeles Unified’s Superintendent, his principal, and his family.

On the last day of school in 2016, his first child was born, a surprisingly early and surprisingly healthy little boy.

“I find myself comfortably at Paulo Freire’s dinner table. As a Critical Theorist who views the world as inherently oppressive, I see education as the means to dismantle those methods of oppression. Recognition is key. Society won’t be changing itself!” 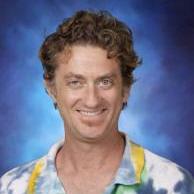